Impact of Islam on Christianity & West 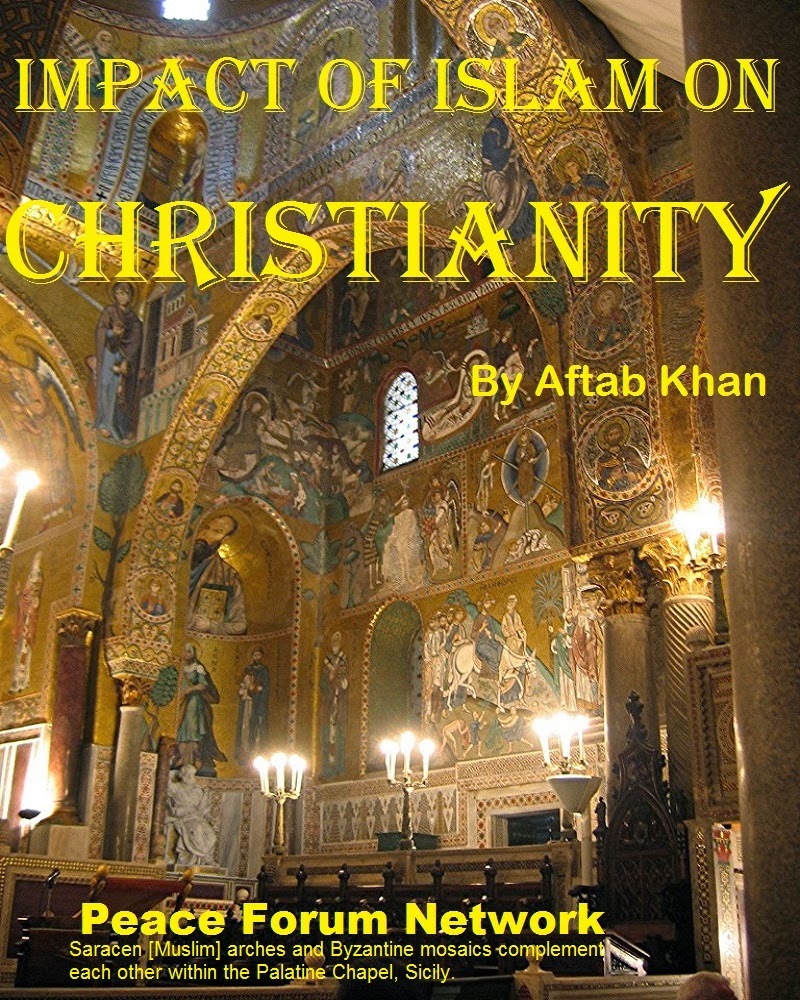 Emperor Heraclius Invited to Islam:
After successfully establishing the Islamic state at Medina Prophet Muhammad (peace be upon him) invited the rulers and people of neighboring areas, to Islam including Eastern Roman emperor Heraclius (610-641 C.E). The letter and details are recorded in Sahih Bukhari Hadith Number:6, Volume:1, narrated by Abdullah bin Abbas. According to this Tradition (Hadith) the letter addressed to Heraclius  reads:
"In the name of God the Beneficent, the Merciful (This letter is) from Muhammad the slave of God and His Apostle to Heraclius the ruler of Byzantine. Peace be upon him, who follows the right path. Furthermore I invite you to Islam, and if you become a Muslim you will be safe, and God will double your reward, and if you reject this invitation of Islam you will be committing a sin by misguiding your Arisiyin (peasants). (And I recite to you God's Statement:) 'O people of the scripture! (Jews and Chritians) come to common terms As between us and you that we worship none but God and that we associate nothing in worship with Him, and that none of us shall take others as Lords beside God (Allah). Then, if  they turn away, say: Bear witness that we are Muslims (those who have surrendered to God).' (Qur’an;3:64).
Heaculius called for the visiting Arab traders, Abu Sufyan (uncle of the Propeht, then a nonbeliever and his enemy) was on a buisness trip, he was produced in the court of the Emperor. After asking many questions about the Propeht and his message, Heaculius was convinced that Muhmmmad (peace be upon him) was a true messenger of God.   Heraclius then wrote a letter to his friend in Rome who was as good as Heraclius in knowledge. Heraclius then left for Homs (a town in Syria) and stayed there till he received the reply of his letter from his friend (from Rome) who agreed with him in his opinion about the emergence of the Prophet and the fact that he was a Prophet.[Contemporary Pope Honorius I (Pope from 625 to 638 C.E) favoured Monothelitism; a formula proposed by the Byzantine emperor Heraclius.]
Then Heraclius invited all the heads of the Byzantines to assemble in his palace at Homs. When they assembled, he ordered that all the doors of his palace be closed. Then he came out and said, 'O Byzantines! If success is your desire and if you seek right guidance and want your empire to remain then give a pledge of allegiance to this Prophet (i.e. embrace Islam).' (On hearing the views of Heraclius) the people ran towards the gates of the palace like onagers but found the doors closed. Heraclius realized their hatred towards Islam and when he lost the hope of their embracing Islam, he ordered that they should be brought back in audience. (When they returned) he said, 'What already said was just to test the strength of your conviction and I have seen it.' The people prostrated before him and became pleased with him, and this was the end of Heraclius's story (in connection with his faith).
However Heraclius had sought in 638 C.E to placate Monophysite by promulgating the doctrine of Monothelitism. The victorious Muslims granted religious freedom to the Christian community in Alexandria, and the Alexandrians quickly recalled their exiled Monophysite patriarch to rule over them, subject only to the ultimate political authority of the conquerors. In such a fashion the city persisted as religious community under Arab Muslim domination more welcome and more tolerant than that of Byzantium.

The  Monothelitist Pope Honorius (625-638 C.E):
The Doctrine of One Mind-One God:
Pope Honorius (pope 625-638 C.E)was contemporary of Prophet Mohammed (peace be on him, preaching period: 610-632). He grasped the truthfulness of message of Islam [most likely through Emperor Heraclius] whose tenets he observed, were very much resembled those of Arius (monotheism preached by Jesus Christ). Thus he found the linkage between Islam and Christianity. In his letters he began to support the doctrine of 'One Mind', because if God has three independent minds the result would be chaos. The logical conclusion pointed to the belief in the existence of one God. This doctrine was not officially challenged for about half a century. In October 638C.E Pope Honorius died. In 680 C.E, i.e. 42 years after his death, a council was held in Constantinople where Pope Honorius was anathematized (cursed, condemned).  This event is unique in the history of Papacy when a Pope was denounced by a succeeding Pope and the Church.
Emperor Leo Abolished Image-Worship:
The Byzantine Emperor Leo-III (717-741) surnamed Isauricus, undertook, in the face of so many difficulties, to purify the church of its detestable idols. Probably the creed of Islam and the success of Prophet Muhammad (PBUH) greatly influenced Leo. Besides, there was a very general feeling among Christians in the East, that it was the increasing idolatry of the church that had brought down upon them the chastisement of God by the invasion of Muslims. The Christians were constantly hearing from both Jews and Muslims the odious name of idolaters. The great Iconoclastic Controversy evidently arose out of these circumstances. The Iconoclasts (those who rejected images) objected to icon worship for several reasons, including the Old Testament prohibition against images in the Ten Commandments (Exodus:20:4) and the possibility of idolatry. The defenders of icon worship insisted on the symbolic nature of images and on the dignity of created matter.
L. F. M. Sozzini (1525-1565 ) Challenged Trinity:
The next two personalities of this faith that deserve mention were members of the same family. L. F. M. Sozzini (1525-1565 C.E) was native of Siena. In 1547 C.E. he came under the influence of Camillo a Sicilian mystic. His fame spread in Switzerland. He challenged Calvin on the doctrine of Trinity. He amplified the doctrine of Arius, denied the divinity of Christ and repu­diated the doctrine of original sin and atonement. The object of adoration according to him could only be the one and only one God.
Racovian Catechism:
Monotheistic Christianity:
Sozzini was followed by his nephew F. P. Sozzini (1539-1604 C.E). In 1562 C.E he published a work on St. John's Gospel denying the divinity of Jesus. In 1578 C.E he went to Klausenburg in Transylvania whose ruler John Sigisumud, was against the doctrine of Trinity. Here Bishop Francis David (1510-1579 C.E) was fiercely anti-Trinitarian. This led to the formation of a sect known as ‘Racovian Catechism’. It derives its name from Racow in Poland. This city became the stronghold of the faith of Arius.
Central to Socinus' teaching was the attainment of eternal life through the study of divinely revealed Scripture. He saw Christ as a real man, though without sin, who by his suffering taught men how to bear their own sufferings. In his view, faith is more than the belief that the teaching of Christ is true; it also results in repentance for sins and in an obedience that leads to eternal life. [More on Monotheism in Christianity]
Socinians:

A rationalist Christian group was formed in the 16th century that embraced the thought of the Italian-born lay theologian Faustus Socinus hence named Socinian. The Socinians taught a rationalist interpretation of the Scriptures, and they accepted Jesus as God's revelation but a mere man, divine by office rather than by nature; Socinians thus rejected the doctrine of the Trinity. One of the Socinians' central doctrines was that the soul dies with the body, but that the souls of those who have persevered in obeying Jesus' commandments will be resurrected. The Socinians also advocated the separation of church and state.
John Biddle (1615-62), an English Socinian, whose knowledge of the Greek text of the New Testament convinced him that the doctrine of the Trinity was not of scriptural origin, published his Unitarian convictions in Twelve Arguments Drawn out of Scripture . . . (1647) and other works; English readers, moreover, were exposed to Unitarian views through Socinian books published in the Netherlands.
Common Themes:
Theologian Earl Morse Wilbur (1866-1956) advanced the thesis, now widely accepted, that the history of Unitarianism in Poland, Transylvania, England, and America gains unity from certain common themes. These themes are freedom of religious thought rather than required agreement with creeds or confessions, reliance not on tradition or external authority but on the use of reason in formulating religious beliefs, and tolerance of differing religious views and customs in worship and polity. Their teachings historically have included the unity of God, the humanity of Jesus, mankind's religious and ethical responsibility, and the possibility of attaining religious salvation through differing religious traditions. They emphasize the authority of the individual's religious conviction, the importance of religiously motivated action for social reform, democratic method in church governance, and reason and experience as appropriate bases for formulating religious beliefs.
Trinitarians however has maintained hold upon major population not due to ideological superiority but due to aggressive missionary activities coupled social welfare projects like education, health, charity, material benefits along with coercion and persecution  wherever feasible.
Christians Today:
Among the present-day Christians a large number of men and women still believe in one God. They are not always vocal. Due to the crushing power of the Churches they cannot express themselves and there is not much communication between them. However with the advancement in communication specially the cyber world, such groups have started to vent their views.
In the end it will be of interest to quote Athanasius the champion of Trinity. He says that: “Whenever he forced his understanding to meditate on the divinity of Jesus his toilsome and unavailing efforts recoil on themselves, that the more he wrote the less capable was he of expressing his thoughts”. At another place he pronounces his creed as:  “There is not three but ONE GOD”.
<Read online or download: WebDoc, PDF>
Islam & Christianity:
History:
http://www.youtube.com/playlist?list=PLC0FE6FF758088DC1