Reconstruction of Religious Thought in Islam

The worst of creations with Good are those deaf, those dumb who do not use their intellect (Quran;2:18) . "And Allah gives another example: There are two men. One of them is dumb who is unable to do anything, and he is a burden on his master. Wherever he directs him to, he brings no good. Can he be equal to the one who enjoins justice and is on the straight path?"(Quran;16:76)
"And in the alternation of night and day, and in the provision God sends down from the sky, bringing Earth to life by it after it has died, and in the varying direction of the winds, there are Signs for people who use their intellect."(Qur'an, 45:5)
“..he who perished might perish by a clear proof and he who survived might survive by a clear proof “(Quran; 8:42) 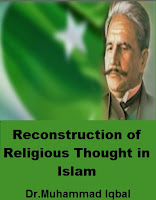 The Reconstruction of Religious Thought in Islam is a compilation of lectures delivered by Muhammad Iqbal on Islamic philosophy; it was published in 1930. These lectures were delivered by Iqbal in Madras, Hyderabad, and Aligarh. The last chapter, "Is Religion Possible", was added to the book from the 1934 Oxford Edition onwards.


In Reconstruction, Iqbal called for a re-examination of the intellectual foundations of Islamic philosophy. The book is a major work of modern Islamic thought. It was a major influence on Iranian sociologist Ali Shariati and other contemporary Muslim reformers, including Tariq Ramadan.
Quotes from the book
View my Flipboard Magazine.
Preface:
The Qur’ān is a book which emphasizes ‘deed’ rather than ‘idea’. There are, however, men to whom it is not possible organically to assimilate an alien universe by re-living, as a vital process, that special type of inner experience on which religious faith ultimately rests. Moreover, the modern man, by developing habits of concrete thought– habits which Islam itself fostered at least in the earlier stages of its cultural career– has rendered himself less capable of that experience which he further suspects because of its liability to illusion.  The more genuine schools of Sufism have, no doubt, done good work in shaping and directing the evolution of religious experience in Islam; but their latter-day representatives, owing to their ignorance of the modern mind, have become absolutely incapable of receiving any fresh inspiration from modern thought and experience. They are perpetuating methods which were created for generations possessing a cultural outlook differing, in important respects, from our own. ‘Your creation and resurrection,’ says the Qur’ān, ‘are like the creation and resurrection of a single soul.’ (Quran;31:28).  A living experience of the kind of biological unity, embodied in this verse, requires today a method physiologically less violent and psychologically more suitable to a concrete type of mind. In the absence of such a method the demand for a scientific form of religious knowledge is only natural. In these Lectures, which were undertaken at the request of the Madras Muslim Association and delivered at Madras, Hyderabad, and Aligarh, I have tried to meet, even though partially, this urgent demand by attempting to reconstruct Muslim religious philosophy with due regard to the philosophical traditions of Islam and the more recent developments in the various domains of human knowledge. And the present moment is quite favourable for such an undertaking. Classical Physics has learned to criticize its own foundations. As a result of this criticism the kind of materialism, which it originally necessitated, is rapidly disappearing; and the day is not far off when Religion and Science may discover hitherto unsuspected mutual harmonies. It must, however, be remembered that there is no such thing as finality in philosophical thinking. As knowledge advances and fresh avenues of thought are opened, other views, and probably sounder views than those set forth in these lectures, are possible. Our duty is carefully to watch the progress of human thought, and to maintain an independent critical attitude towards it.

For batter understanding, it is strongly recommended to first read Abridged Lectures <<here>> 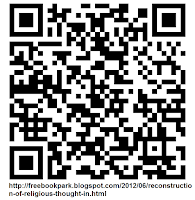