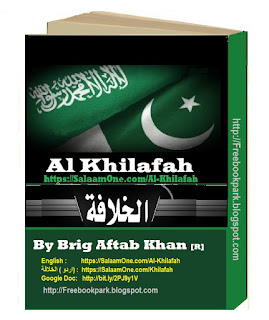 Many people think that in modern era there is no room for a primitive concept like Al-Khilafah, while others think that it is the only solution to the problems faced by Muslims. These two are extreme positions. The nostalgia of Caliphate lingers on the collective memory of Muslims as a symbol of unity in the glorious past. The urge for revival of splendor and dignity has turned some to make efforts for revival of the Caliphate, as a quick fix to the complex problems of lost identify and grandeur. This has alarmed the oppressive corrupt Muslim regimes as well as the neocolonial powers. While the viability of establishment of system of Caliphate in some form is yet a distant proposition, which is possible through evolutionary process. However there is a need to look in to this concept in political, economic, geographical, historic and religious perspective.
Following there are three e-book on Al-Khilafah . embedded below with links:
Al-Khilafah [English] by Brig Aftab Khan
Al-Khilafah - Books by Dr.Israr Ahmad
Al-Khilafah - Videos Playlist .....